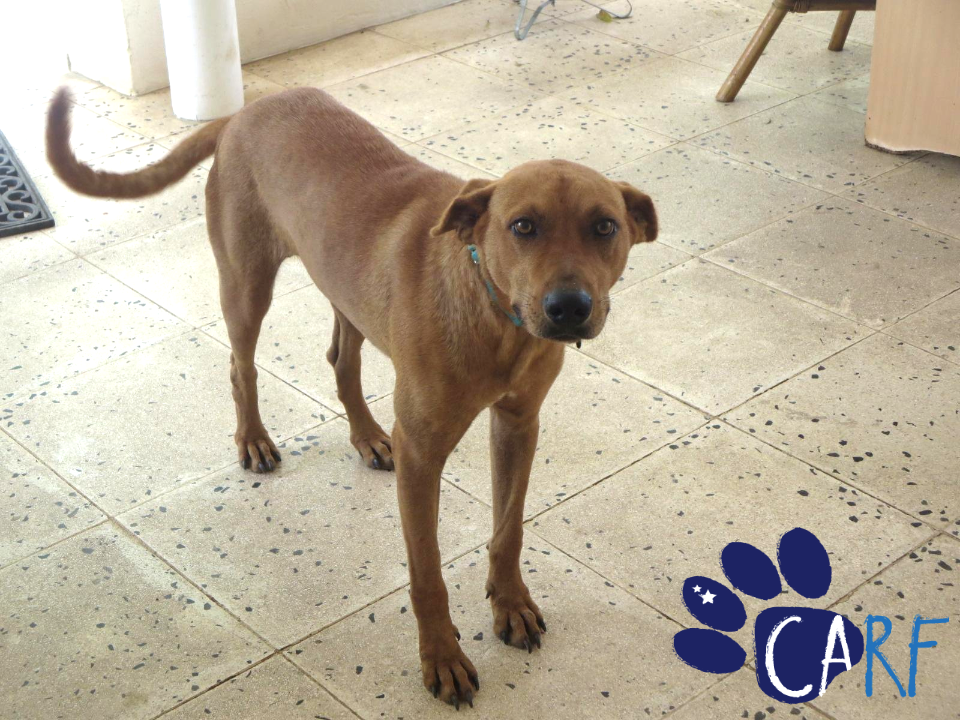 On April 24th, 2015, we received a message from someone saying that they had spotted a skinny stray dog who was clearly in need of help. She couldn’t take him in herself, but she could tell us where we could find him: Cas Abao Beach. With its clear turquoise water, waving palm trees and white sandy beach, Cas Abao is a true paradise. But for Buddy? Not so much. We can only guess how this poor soul ended up here, but we knew that he wouldn’t survive here much longer. Buddy was in bad shape, he was very skinny and you could count every rib and see his spine. He was also covered in hundreds of ticks and at fleas. It was time for action.

A volunteer offered to drive out to Cas Abao to check if Buddy was still there. She couldn’t leave until after she finished work so it took a few hours, but we eventually received good news. Not only did she found Buddy, he had let her pick him up without much resistance. The volunteer had placed Buddy in her car and they were now together on their way to the shelter.

A few days later Buddy was able to move to his foster family. When he first got there, he was really shy. He would watch their every move and didn’t make any attempts to leave his spot in the corner of the room. Eating from their hands? He’d rather not.

It wasn’t until a few days later when we let Buddy meet with some other dogs. We weren’t sure how he would react, but we soon found that this was the best thing we could have done. Buddy easily made friends with the other dogs and he started to copy their behavior. When our volunteers heard him bark for the first time, they were surprised by how loud his bark was. This quiet, timid dog would one day make a great guard dog!

Buddy slowly began to trust people and he started to enjoy his new life. He spent some more days at a second foster family before moving to his forever home.

Buddy is now named Brody, and is living happily with his loving human and a furry friend called Bailey.

“To see Buddy transform from a skinny and timid dog that was scared of everything and everyone into a happy and confident dog has been amazing. I couldn’t be more happy for him that he found a forever home. He really deserved this life, this chance.” – CARF Volunteer.

If you would like to receive more information about becoming a foster parent with CARF Curaçao, please contact us at stichtingcarf@gmail.com.
By CARF Curaçao|2020-04-21T13:28:30+00:00August 24th, 2015|Success Stories|0 Comments